Since I created my Space Wolf Battle Leader for my 2011 Golden Demon entry, I’ve had quite a few emails from people asking how I went about painting the tattoos. So here is a quick guide showing you how I did it.Like a lot of people I used to shy away from painting tattoos on miniatures. After you’ve spent hours making sure the skin is blended exactly how you want it, the thought of freehanding loads of black lines all over it would make me break out in cold sweats. But really they are not that complicated to do.

The main thing is to plan it out on a piece of paper first. Look on the Internet, I just googled ‘Tribal Tattoos’ for my competition entry and it brought up thousands of images. I’m lucky as I have a Welsh Dragon tattooed on my back too, so I could just look in the mirror to see how the tattoo looks (not that I’m saying go out and get a tattoo so you can have some reference material on hand at all times :)).

You don’t need complicated designs on every tattoo either, some miniatures would look cool with intricate Celtic sleeves and bands on their arms, but even the simplest tattoo will add character to the miniature, so give it a shot.

Paint the flesh and details as you normally would and keep some of the flesh mix to one side, for the later stages of the tattoo.

I wanted quite a fresh looking tattoo for this guy so I took a mix of Chaos Black, Regal Blue & some of the flesh mix I used when painting the face (2:2:1).

Using a detail brush (Size 00) I lightly painted some thin guide lines on to the flesh to plan out the tattoo. Don’t worry if you make a mistake at this point, we will be tidying it up as we go along. We will add weight to these lines once we are happy with the design.

Once I was happy with the layout of the tattoo, I went over the lines and added some weight to them using the same Chaos Black, Regal Blue and skin mix. If you make small mistakes, taking some of the flesh mix and touch up any stray lines etc. Keep going back and fourth between the black and flesh until you are happy with the results.

Because I wanted this to be quite a new looking tattoo, I went for quite crisp lines. As tattoos get older the edges bleed and the become fuzzy so if you wanted an older looking tattoo you would use the watered down flesh mix to break up the edges a little and make them more fuzzy.

Right, the tattoo is finished and the hard bit over. But at this stage it is looking quite bright and doesn’t look as if it is under the skin like a real tattoo should. So in the next step I’ll show you how to fix this.

I took some more of the mix I saved from when I was painting the flesh and water it down to a glaze. I then applied 1 or 2 thin coats over the tattoos and let it dry. The more layers you add the more faded the tattoo will look, so this is just to your personal taste.

Just to make the tattoo blend in a little more again, for the final stage I used some of the highlight mix I used on the flesh and reapplied the highlight at the top of the head, over the finished tattoo. Job done!

Hopefully you have found this short tutorial of use, obviously I took a lot longer on my entry for Golden Demon than I did for this guy, but it gives you a good idea of how I went about it.

Try to experiment with new and old looking tattoos. New tattoos usually have a very dark bluey/black colour to them and hard/crisp edges as above, but as tattoos age their edges bleed and become fuzzy, and as the ink deteriorates they acquire a greenish tint to them sometimes. The Internet has lots of reference pics for tattoos, just google them and see what you can come up with. 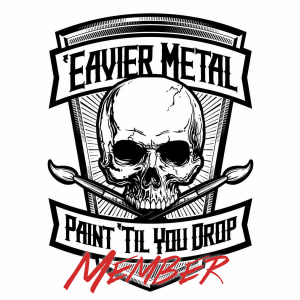